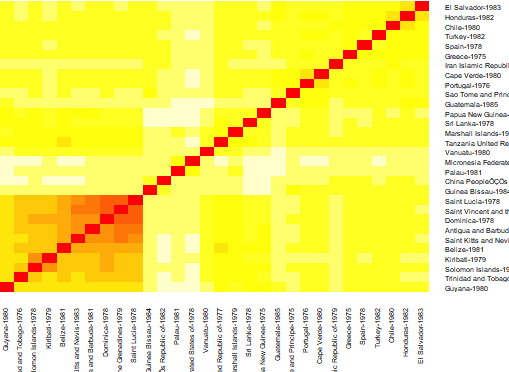 A constitution’s primary role is to describe the rules a government must obey when governing a country. The documents set clear “rules of the game” and protect a population from their government’s abuses of power. Yet, in every country, the optimal rules and protections will be different. As a result, protections that may allow one society to flourish may hold another back. It is important that a constitution is crafted to protect the individual needs of the society it is protecting.

For this reason, the process of drafting a constitution is often painstaking. To do a good job, governments must craft protections in coordination with both legal experts and their civil society. This often includes an in-depth consultation process accross a country. Yet, this is not always the case.

The history of colonization is still felt to this day in so many ways. This legacy includes the constitutions that regulate the countries in the Caribbean. These constitutions offer many important protections that underpin a democratic society. Yet, the evidence suggests that their civil societies had little input.

Between 1975 and 1985, a host of former British colonies in the Caribbean repatriated their constitutions. This allowed the countries to reclaim control of their governance, or so it seemed. Instead, however, these countries adopted constitutions that were almost identical.  While this clarified the rules of the game and protected fundamental rights, these societies may not have adopted constitutions adapted to their unique needs.

This blog post will use a similarity analysis introduced in Lesson 6 to identify a cluster of constitutions with an unusual level of similarity. Then, it will identify the two most similar constitutions, Saint Vincent and the Grenadines in addition to Saint Lucia, and use them as a case study to illustrate what these similarities look like. Finally, we will discuss the benefits and pitfalls of such an arrangement.

What is a Similarity Analysis?

Similarity measures help investigate legal content. Often, contracts, statutes, and treaties are built from templates. Additionally, case law often incorporates wording that is nearly identical to other precedents. This means that these texts contain provisions with already-established meanings. In turn, this helps promote legal certainty, because similar language may have already been interpreted by other courts. For example, researchers associated with this website performed an exhaustive analysis of bilateral investment treaties at www.mappinginvestmenttreaties.com.

Similarity measures exploit these patterns. They quantify the similarity between two documents and help identify unique passages. This reveals sub-groupings within a large corpus. Here, we look for sub-groupings of constitutions.

First, we define the constitutions that we want to analyze. In this post, we will be looking at constitutions adopted between 1975 and 1985. So we subset our data to match this timeframe

Next, we build on Lesson 6 and visualize this distance matrix as a heat map. This visualization is in the discussion section. Each of the lines of code below determine the settings of the heatmap. This includes the type of statistical comparison, the information that is inputted, the titles, and what the visualization looks like.

In this section, we will discuss what similarities these Caribbean nations shared. In doing so, we identify a British influence on their institutional design and the rights that were protected.

The heat map below depicts the textual similarity of the constitutions adopted between 1975 and 1985. Clustered by similarity, it shows that many of the former British Colonies in the Caribbean have similar constitutions. The heatmap is symmetrical, meaning that both axes display the same information and follow the same order. Thus, the diagonal red line represents treaties being compared with themselves. The other red-tinted squares represent an unusual level of similarity. At a high level, we can identify a pattern of similar constitutions in the bottom-left corner.

Finally, each of the countries in this cluster, except St. Kits and Nevis, have a Westminster style of government with a Governor-General, a legislature, and a senate. This shows that these countries developed institutions that resemble those of the British Empire.

Comparing Saint Lucia with Saint-Vincent and the Grenadines

Next, we will analyze the two most similar constitutions. 71% of their text is identical. This compares to an average similarity of 34% in the time period.

The similarities that the constitutions share are a mixed blessing. On the one hand, these two constitutions protect many of democracy’s highest ideals. These protections are vital to having individuals live dignified lives. Further, these protections are embedded in the British rights tradition that protects individuals from state actions, and in a canon of well-developed jurisprudence.

On the other hand, constitutions should reflect the desires of the local population. Each country should be in control of the decisions made within its borders. Yet, here it appears that these countries did not play an active role in drafting their own constitutions. It is unlikely that a constitution drafted with an engaged civil society would be identical to another country’s constitution. As such, the populations in these countries may have to abide by a set of constitutions that do not fully reflect their values.

Of course, what these rights protect may vary according to how their courts interpret the provisions. A constitutional right to life even if expressed in similar words likely remains purposefully broad which means that it can be interpreted in different ways in different countries. While this may give rise to a distinct legal culture, the country may still be left with protections that do not fully match their needs.

In Saint Lucia, Saint Vincent and the Grenadines, and throughout the rest of the British Caribbean, countries have constitutions that protect many of the high ideals of liberal democracy. Yet, oftentimes these high ideals were not crafted by that society. As such, there may be some aspects of their culture that are prized by the local population, but which are left unprotected.